I had just finished reading some H.P. Lovecraft, so his flavor of awesome was still fresh in my mind. Usually when thinking about making these I go through lots of failed ideas before connecting something random to something else that could relate in shape or texture. I landed pretty quickly on Santa's beard being similar to Cthulhu's tentacle mouth. After that, I just needed classic scene to befoul, like a child in Santa's lap. 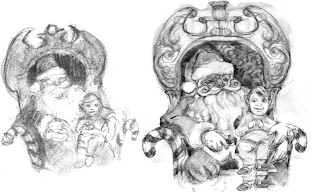 My first thumbnail and loose drawing was just to figure out a pose and loose shape to play with. I knew I'd have to fit batlike wings in somewhere so Santa's chair became ornate to fit those needs. You can see I was playing with sizes and shapes still in the rough sketch from the doubled up legs on the child. 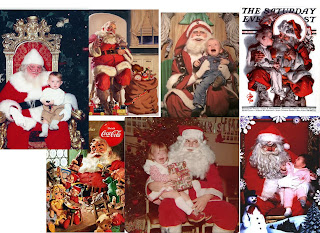 From here I grabbed a bunch of reference of classic shots of Santa, Santa's lap, happy or screaming children, etc. I wanted it to read as the quintessential happy boy waiting to tell Santa how bad he wants a bb gun type thing. Old illustrators and Saturday Evening Post covers are a great place to start for that timeless imagery, google image search helped with the rest. 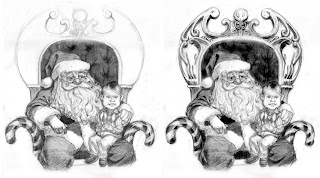 Then I refined the sketch to get the folds and figures believeable. The chair became important since drawing simple ornate carvings bores me, and reflect in the drawing. So I dropped hints of Cthulhu into the before shot, which was a lot more fun. Photoshop helped a lot in that I only had to draw half and then mirror it to get a nice symmetry. 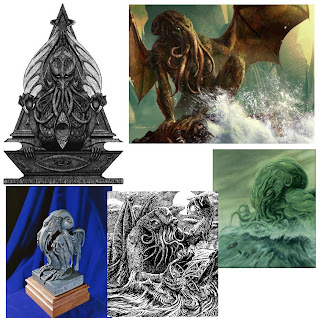 Then I gather some reference for Cthulhu. Its a little strange to look up photo reference for something that doesn't exist, but in this case it was necessary. I had Lovecraft's prose to go by, but he writes in a very old timey way that can be interpreted different ways. So, seeing what some other artists have done helped understand what I wanted to do.

Since the jump from before to after can't be too dramatic, I've found the best way to work is to use a print of the sketch and tracing paper to get the shapes equal. When the shapes match up, I retool them to be the after shot. Even then I end up tweaking and resizing a lot in Photoshop to get it right. 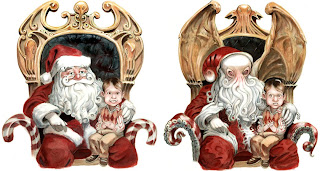 The before shot of Santa obviously dictated a lot of the after shot of Cthulhu. I had to pay attention to both my sketches and the finished paint to tell me where to go with value and color. Tentacles are always easy to play with, and matching the gestures of the beard and candy canes definitely added a nice touch. To finish off the rollover, I laid the after shot onto the before and erased out some of the wings to show some of the chair behind it, making the transition much smoother.

Tor.com is now hosting this image on their site during Cthulhu month, and you can buy it on holiday cards and baby onesies if you think your toddler needs exposure to the maddening abyss.

Thanks for reading!
-SB
Posted by Unknown at 1:23 PM

I also made the beard/tentacle face connection whilst watching Trading Places last night. The scene where a down and out Dan Akroyd is dressed as Santa with a dirty matted beard made me think of ol' squidface.

The kid looks afraid that he won't be eaten first.

I hope you don't mind that I'm converting your picture in to a Christmas stocking for some friend's baby as a gift.

I hope you don't mind that I'm converting your picture into a Christmas stocking for some friends' baby as a gift.

As long as you don't make boatloads of money off of it, I'm totally cool. Send a picture!

If you have any interest in merchandising, pleasepleaseplease make the finished image into Christmas cards? I would definitely pay money for those.

Tor.com actually sells them each season, you can get them here:
http://www.zazzle.com/tordotcom

I've been meaning to make a series of all the rollovers myself, but I've been too busy. Hopefully by Moccafest this year, I'll have these, valentines and some other holidays.